Plastral in turn supply Living Tiles in Sydney and other companies engaged in commercial and residential tiling projects.

When System SpA introduced Laminam it reached agreement to manufacture specific colours for some producers including Italy’s Provenza. Other companies actually acquired System machinery and developed their own product, including Italy’s Cotto D’este and Turkey’s Kalebodur.

Chinese manufacturers generally recognise a good thing when they see it, consequently Mona Lisa launched a robust 6 mm product. Laminam (Italy) realised the potential of the market in China and they quickly established a partnership with China’s Bobo, which organised a meeting with 200 architects and designers at the Swisshotel in Foshan, China. Bobo recognised and understood the benefits of Laminam.

Under the brand name Bobo Lamina the company markets the product in 36 strategically located outlets all over China. According to a press release titled ‘Laminam Creates the Partnership in China’ Bobo ‘plans to open 70 more outlets by
the end of 2012, intensively promoting Laminam and its products.’

They also displayed the Bobo Space Art brand, a bold collection of highly decorative digital designs which are primarily produced in 600 x 1200 mm panels. The Bobo Paris and Space Art collections are produced in a 4.8 mm thickness.

In 2009 Italian and Spanish manufacturers exhibiting at Cersaie launched hundreds of new low-thickness products in conventional formats and a wide variety of thicknesses. Most of these products were manufactured using new processes which began in 2006 when Spain’s Neos Additives registered patents for a process which involves use of additives which permit the
reformulation of a tile body allowing a 50 per cent reduction in the overall thickness of the body. This allows manufacturers to use traditional manufacturing processes, thus saving time and preserving the integrity of the finished tile body. This innovative process received two prestigious Alfa de Oro awards.

Neos products are distributed worldwide by Italian company Smaltochimica. The type and volume of additive used varies in accordance with the physical dimensions of the low-thickness tile or panel and its thickness. The prime objective is to maintain flatness and dimensional stability, which is achieved by controlling pyroplastic deformation during firing.

Many of the large thin panels and lowthickness tiles meet the requirements of ISO 13006 and EN 14411 for ceramic tiles.
By 2010 Laminam were manufacturing panels and tiles in a wide variety of formats and thicknesses, including a 7 mm product primarily designed for use on kitchen benchtops.

In Sydney companies like Living Tiles and Rocks On have developed reliable installation teams, with the required experience to cut, handle and install large panels and regular formats in commercial and residential environments. In Victoria Cerdomus Tile Studio have actually obtained a local Ecolabel for Kale Bodur’s Sinterflex. Commercial Director Damian Turco said, “It took several months to obtain certification for the product but we can now fully promote the environmental merits of Sinterflex, architects are responding and we have completed several interesting projects.” 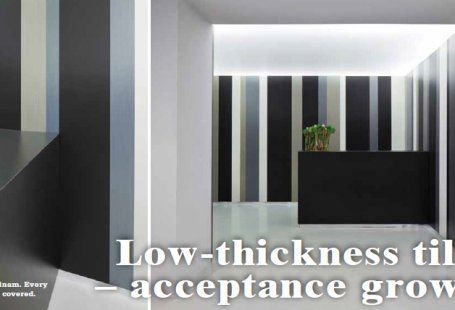